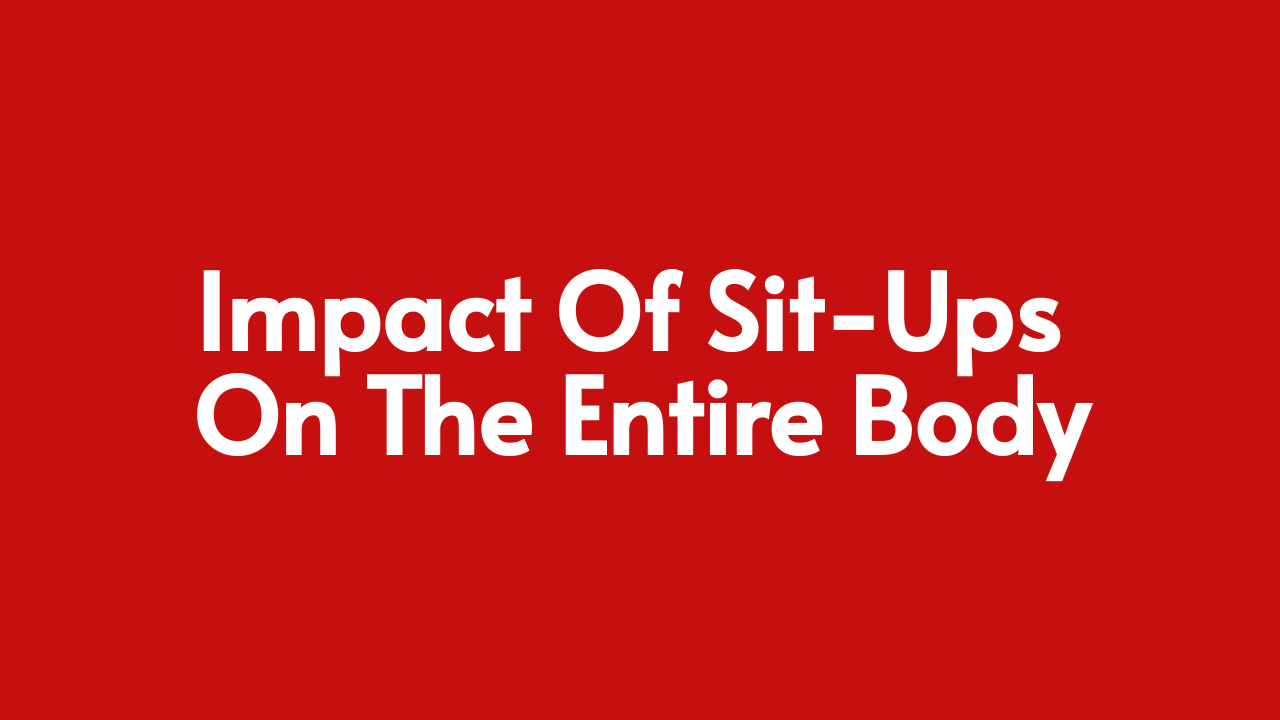 These individuals should begin by strengthening the transverse abdominus, obliques, lumbar multifidus, pelvic floor muscles, diaphragm, and transversospinalis. When people have weak stabilizing muscles, the forces in the lumbo-pelvic hip complex increase, which can lead to low back pain and injuries.

Individuals should begin their core training with core stabilization exercises to provide adequate stability throughout the lumbo-pelvic hip complex in order to reduce the number of injuries associated with performing sit-ups.

The core musculature is divided into two parts: the stabilization system and the movement system. The stabilization system is in charge of the lumbo-pelvic hip complex’s stability, while the movement system is in charge of core movement. Both systems function as an integrated functional unit, and when one system fails, the kinetic chain is disrupted, resulting in various dysfunctions throughout the upper and lower body.

Furthermore, if people train the movement system before the stabilization system, they are more prone to movement compensations, synergistic dominance, and inefficient movements that cause dysfunctions throughout the entire kinetic chain. Individuals must therefore strengthen their core properly, beginning with core stabilization, in order to avoid dysfunctions throughout the upper and lower body.

What Exactly Is a Sit-Up?

The standard sit-up, also known as curlups, involves lying on your back on a mat with your feet restrained, either by a partner or by hooking them under a stable object. Lift your torso all the way up to your legs and lower back down to complete one repetition with your hands cradling your head and neck.

There are numerous variations of the move. Cross your arms over your chest, perform the move without anchoring your feet, curl up and down on an incline bench, or perform the sit-up while holding a weight at your chest or behind your head.

Sit-ups can also be done on an unstable surface, such as a stability ball or half-ball. However, according to research published in the 2008 issue of Perceptual Motor Skills, the most muscle activation occurs when you do a full sit-up on a firm surface, such as the floor.

The rectus abdominis, the sheath of muscle fibers that covers the front of your torso, is the primary muscle activated during a sit-up. A study published in the Journal of Strength and Conditioning Research in 2013 found that doing a sit-up without anchoring the feet activates this muscle more than doing it with the feet anchored.

During a sit-up, the obliques at the sides of your waist contract as well. They contribute to the action but are not the primary movers. These muscles bend your torso side to side and rotate you left and right in real life.

They also help to keep your spine stable. Add moves like side planks and seated, weighted twists to your routine if you really want strong obliques.

Tightening of the Hip Flexors

The hip flexors, also known as the illiopsoas, help you flex and extend your torso as you rise and lower during a sit-up. The hip flexors are a set of muscles that connect the femur (thigh bone) to the pelvis. When you sit, stand, run, walk, or squat, they are activated.

Sit-ups contribute to hip flexors that are short and tight. Chronically tight hip flexors, which affect a large proportion of the population, can cause low back pain.

Although you may think of sit-ups as an ab-specific exercise, you may notice that the fronts of your thighs fatigue after a few reps. This is because your quadriceps muscles, including the sartorius and rectus femoris, are engaged when you do a sit-up.

During a sit-up, another thigh muscle, the tensor fasciae latae, located on the outer upper thigh, also works. When your feet are hooked under a brace, the anterior tibialis at the front of your shins stabilizes the lower legs.

Sit-ups aren’t a full-body core exercise. They do not engage the internal abdominal muscles, including the transverse abdominis, which are essential for good posture and stability.

It’s fine to include sit-ups in your core routine, but you should also do a variety of other exercises to work the muscles that support your spine and directly target your obliques. Consider adding front planks, bird dogs, and cable rotations to your workout for a more complete workout.

Is It Safe to Do Sit-Ups or Crunches While Pregnant?

How to Do More Sit-ups?