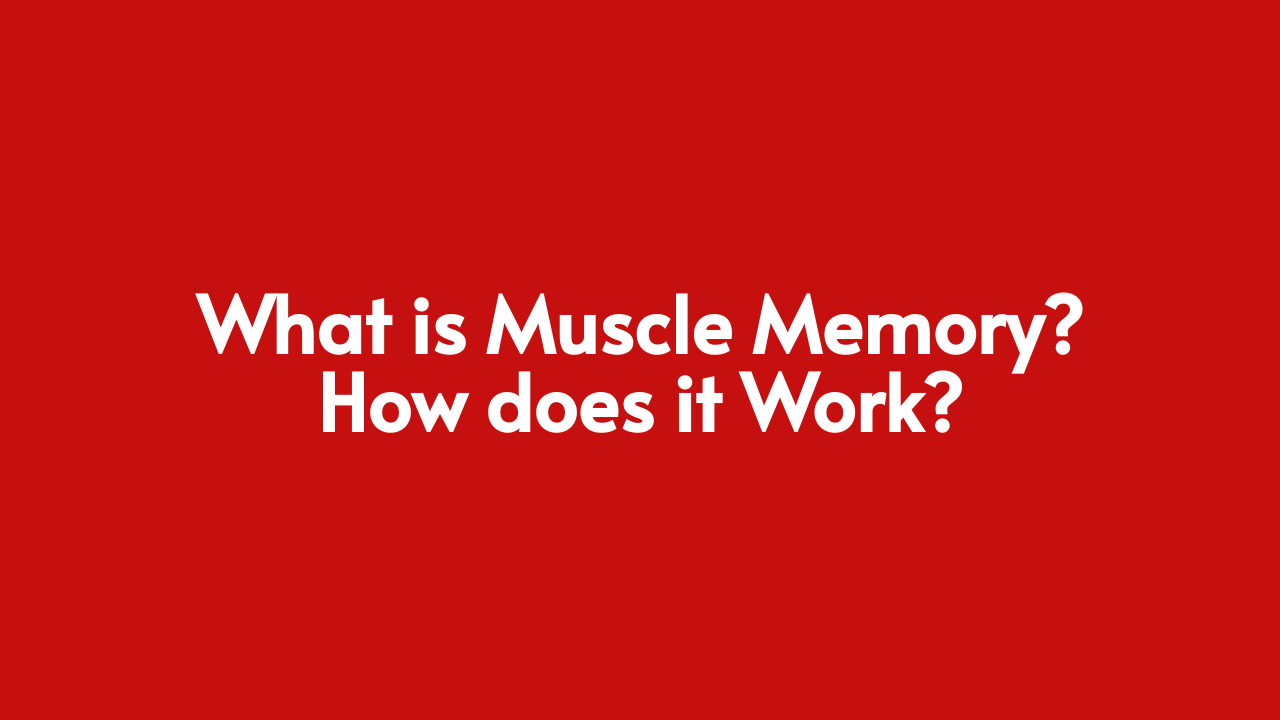 Many of us may be unaware of muscle memory and may be curious as to what it is. When a muscle is first formed, it can always be rebuilt, which is known as muscle memory in humans. When you return to working out after taking a break, muscle memory takes over.

Earlier this year, due to Covid-19, many of us took a long, unplanned break from the gym. If you’re taking months off for personal reasons, you’re likely to have suffered significant strength losses.

When will your muscles recover if you resume training and weight lifting?

Because you’ve likely built muscle memory and a foundation of strength, it won’t feel like you’re starting from scratch. Getting it back, however, does not imply that it will be easy.

Even if you take a long break, muscle memory training and proper nutrition can help you regain your strength.

Although it is difficult to quantify, there is a learnt component to training in which distinct muscular contraction and relaxation patterns are acquired and fixed for various types of activities (muscle memory).

What exactly is Muscle Memory?

Many simple daily actions involve a complex sequence of muscle tension and relaxation. We have practiced the majority of the actions throughout our lives, so they are faster, smoother, and more accurate.

Actions as complex as riding a bike, knitting, or even playing a musical instrument can be performed almost subconsciously as a result of repeated practice. It is provided by the power of repetition in committing a motor task.

Although muscles cannot remember anything, the nerves that connect to them do play a role in motor learning. Any movement necessitates brain activity, and as you perform repetitive movements, your brain develops patterns for motor skills. As a result, future movements will be less cognitively demanding.

What Does Muscle Memory Do?

Muscle memory most commonly occurs in the context of muscle loss – or when you do not train regularly for an extended period of time. People believe that if you train hard enough, muscle memory will help you quickly regain strength and size. Muscle memory, on the other hand, is about learned motor skills rather than strength.

Muscle memory, which is typically achieved through training to excel, is frequently associated with improved performance and muscle mass gains.

Excessive hypertrophy in the gym results in the production of a growth factor known as myonuclei in muscle fibers. These cells are critical in increasing the strength of our muscle fibers.

According to several studies, the number of myonuclei in muscles remains stable even after prolonged inactivity and muscle atrophies. As a result, those cells will be present the next time we go to the gym, ready to synthesize protein faster than they did the first time.

How to Use Muscle Memory to Your Advantage

Muscle memory is an element to consider while regaining strength and bulk following a period of inactivity, but it is not the only aspect to consider.

Persons with greater muscular mass who lack access to their preferred equipment — barbells, strength machines, etc. — will struggle to maintain their size in comparison to smaller individuals who can maintain their muscle mass through alternate forms of fitness (such as band workouts and bodyweight exercises).

According to a 2015 Danish study, young, physically active individuals who became immobile lost one-third of their muscular strength, while elderly individuals lost only one-fourth.

Food intake also plays a significant role – if your body is accustomed to ingesting enough calories to fuel you through your gym sessions and you abruptly stop, the resulting caloric shortage will result in a loss of size.

If you’re forced to skip a workout, make sure you don’t scrimp on protein. Increased protein consumption was found to minimize athletes’ loss of lean body mass even when they were not training.

Now for the question of when those muscles will reappear. According to one study, immobile individuals require three times the amount of time they were out of activity to regain muscle mass. Unless you haven’t left the couch in three months, you are most likely not immobile, and your window will be far shorter.

In a more recent study, active persons who took a 12-week break from training were able to reclaim their muscles and return to their 1-rep max after just eight weeks.

This is not to mean that you should panic if you haven’t been able to do some intense training in a while – if you’ve spent the most of your life staying fit and eating healthy, you’ll be back on track in no time.

Here are some of the benefits of muscle memory that I have noted for you. Let’s take a look at the benefits:

What Happens When it goes Bad?

Because you don’t have to exert much mental energy, muscle memory allows you to work harder and achieve more significant results. Muscle memory is a learning movement, whether it is correct or incorrect.

By repeatedly performing an incorrect movement, you are “teaching” your nervous system and body that this is how you should move.

If you’re learning a new skill—whether it’s weightlifting, yoga, swimming, or something else—take the time to learn it properly. You can get advice from good coaches and trainers. It is far safer and less difficult to learn something and correct a mistake the first time than it is to retrain one’s muscle memory and undo a mistake.

All of this is to say that you shouldn’t be concerned if you haven’t been able to do any hard training for a while. When you’ve spent the majority of your life eating right and staying fit, you’ll recognize when you need to get back in shape.

It takes time and practice to learn to do anything physically, whether it’s a squat or strumming on a guitar. Your muscles play a role as well, but the brain is far more important in determining what action you take. You may only feel as if your muscles are working on their own.

6 Abs Exercises That Can Cause Injury

How To Get Rid Of Upper Stomach Fat

Which Are The Worst Foods For Belly Fat?