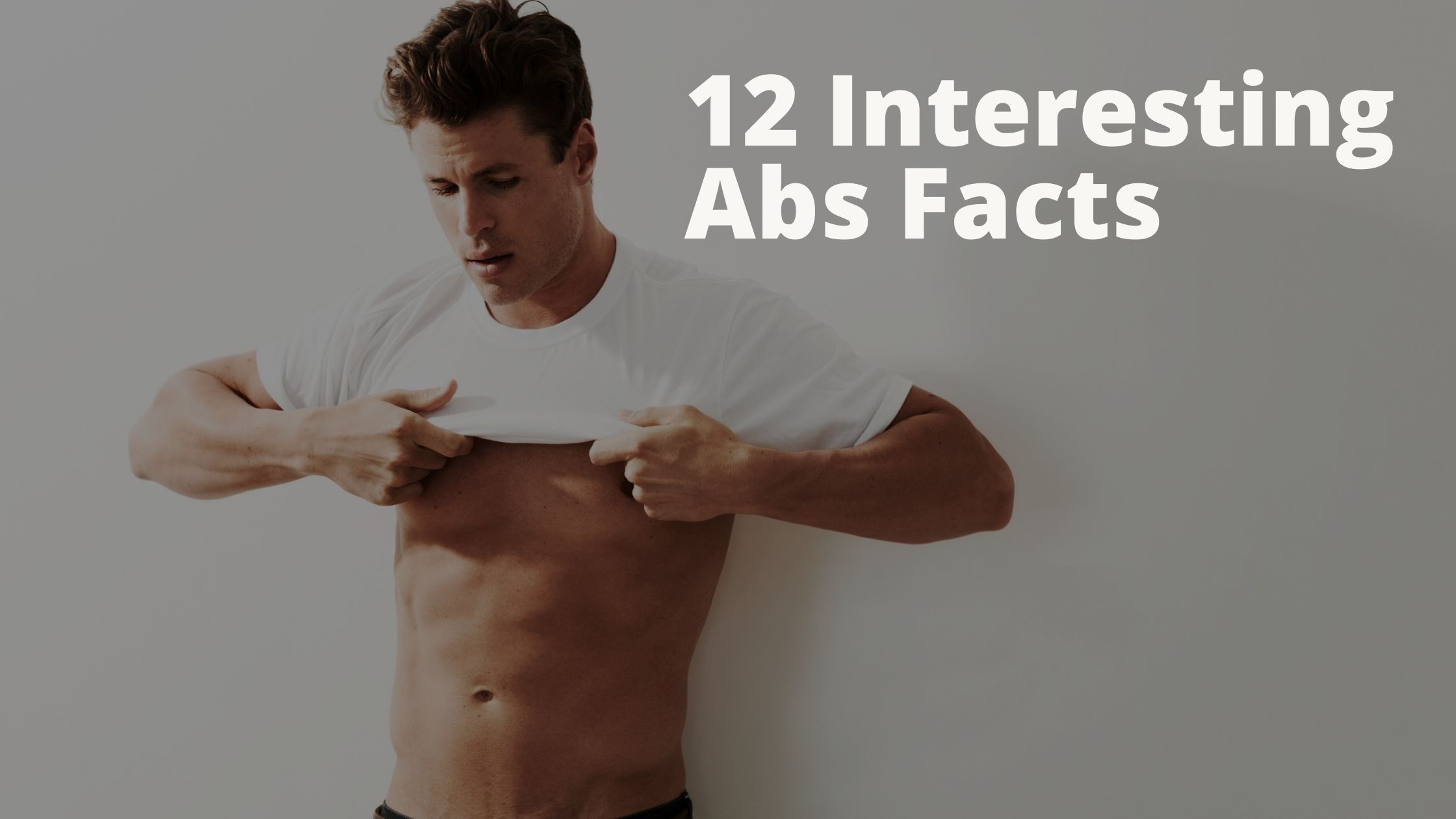 Abs Facts: Everything you’ve ever wanted to know (and everything you’ve been afraid to find out) about your six-pack, beer gut, muffin top, or any other variation of your stomach shape you might be currently harboring.

This is to be expected—the six-pack is very popular. There are over 1.2 million Google searches for this term every month. While your midsection has six sexy segments, there is much more to it than that.

Although it appears to be a simple muscle on first glance, the ab muscularis, known as the ab major or ab toni, consists of the layers of dense connective tissue known as fascia, which cause the “separations” (fascia sheets) in this muscle.

Your external and internal obliques assist in side bending and rotating your upper body to the left and right. If everything in this article is new to you, keep reading for 12 interesting abs facts you likely don’t know.

You Don’t Need to Train Them Every Day

If you follow a daily routine of abdominal exercises with the goal of achieving a “perfect” belly, you may be training your muscles beyond their capabilities. According to James Brown, Founder of R2B Enterprises, Abformer Products range AbMax300 , a lot of people go overboard when it comes to ab training. They do abs seven days a week, without allowing for any rest, and thus injure their muscles.

Additionally, doing a series of core-strengthening exercises should be followed by doing something different in order to achieve different results. A study published in the Journal of Strength and Conditioning Research found that doing only core-strengthening exercises doesn’t slim your waistline. Volunteers who performed seven sets of exercises five days a week had stronger abdominal muscles, but they did not lose any fat or inches. To show well-defined abs, you must work out all of your major muscle groups, engage in cardiovascular activity, and follow a healthful diet.

If You Want Stronger Abs, You’ll Need a Stronger Back

Think of your lower back as the supporting cast if your abs are the stars of the show. Wondering how big your waist is?

Here’s some important info to know: your lower back is part of the equation, just as much as belly fat is, says James. If you maintain a strong lower back, you are able to complete more demanding ab workouts without the risk of injury. James affirms, “You can’t be completely one-sided.” This is the same problem we see in athletes who excessively build their quads and wind up with hamstring injuries. Otherwise, your lower back will suffer.

Some Ab Moves Are More Effective Than Others

Most exercise infomercials try to capture the attention of customers with the guarantee of six-pack abs. However, in 2001, the American Council on Exercise (ACE) conducted a study on the most effective ab-targeted exercises, and this showed that the best exercises can be performed at home with only a few pieces of equipment. To measure the degree of effort required to perform 13 basic ab exercises, the researchers put participants through their paces. For 148% more muscle activity, the bicycle crunch, the captain’s chair, and the stability ball crunch had the best moves, respectively. The reverse crunch is a great way to train your obliques. That traditional crunch is only 140% as effective as hitting the sides of your torso.

Some Ab Moves Aren’t Worth Doing

The First Six-Pack on the Silver Screen Caused a Stir

It is no longer rare to see movie stars showing off six-packs in film roles. In fact, there hasn’t been a Ryan Reynolds movie in which he hasn’t had a role where he’s had to take his clothes off. In the 1934 film It Happened One Night, it’s said that undershirt sales fell after Clark Gable bared his belly.

The two types of fat found under the skin are subcutaneous and visceral. Visceral fat is located within the torso and wraps itself around major organs such as the heart, liver, and intestines. For subcutaneous fat, which you can pinch, a CT scan or an MRI is required to view it. It is also possible to appear to have a low body fat percentage even if you have a lot of visceral fat.

Not All Fat Is Created Equal

A visceral fat deposit is much more difficult to detect and poses greater danger than a subcutaneous fat deposit. Potentially harming your heart and blood vessels and interfering with your body’s ability to use insulin are much more likely to occur. Belly fat has been shown to greatly increase your risk of cardiovascular disease, diabetes, metabolic syndrome, stroke, various cancers, and various other diseases. Even when compared to obesity, the impact of visceral fat on older women’s cardiovascular health appears to be more significant. Researchers found that those who had the most visceral fat were 145% more likely to develop dementia than those who had the least amount of visceral fat.

Belly Fat Can Increase Your Risk of Osteoporosis

It was assumed that since women who are underweight are more likely to develop osteoporosis, a woman who is heavier is healthier because of this. According to a study presented at the Radiological Society of North America’s (RSNA) Annual Meeting, being obese reduces bone mineral density.

You Can Eat Your Way to a Flatter Belly

You must be very surprised to know this abs facts – Increasing your intake of monounsaturated fatty acids (MUFAs) can help prevent belly fat gain and subsequent weight gain, according to a study in Diabetes Care. MUFAs are also known to help lower LDL (bad) cholesterol.

A Strong Stomach Protects Against Injury

A U.S. study found that Strong abdominal muscles are found to be linked to injury prevention in the army. After being drafted, 120 new soldiers completed a year of field training and were measured on their sit-up proficiency, at which point they completed a basic army fitness test. The men who were able to do the most sit-ups during the test (73 in two minutes) were nearly five times less likely to be injured during training with the lower body (lower back injury included). Strong abs play a larger role in injury prevention than other muscle groups do.

Women need to work harder to get visible abs.

In general, women have higher body fat percentages than men. Women have 25% body fat, while men have 15% body fat. Females have more alpha-2 receptors in their fat bulges, which contributes to more assertive behavior. Future energy storage receptors are beneficial, but they impede fat loss.

If you want to shape your abs and surprise everyone – AbMax 300 is the supporting device you need. AbMax300’s has ergonomic design and it’s flex action technology supports your back. It comes with stress cushion padding and the best part of AbMax300 is – it’s portable and lightweight, so you can easily carry it with you. AbMax300 is the best sit-up device ever designed and it let’s you do 300+ sit-ups in 4-8 weeks.

You can buy AbMax300 from Abformer products exclusive store. Check it out now!

Are There Any Benefits of Nonstop Sit-ups?

How To Have Ab Workout Without Crunches?

How to Do Side Crunch at Home?